We just moved into our new house in a small, semi-rural suburb of Hobart called Ridgeway on the side of Mount Wellington. We are really enjoying the new house but I no longer have an office at home. So I now ride my bike to work 5 days a week.

Three days a week I ride ‘down’ the mountain to Kingston and back home up the mountain again in the evening. The other two days, I pop into Hobart instead. Why is ‘down’ in quotes? Because even the downhill route involves 250m (800ft) of climbing. There are many possible routes but I have selected three on the basis of traffic and road surface: the shortest route is a very rough, steep dirt road and I’m not keen on riding it on my road bike; I also try and avoid heavy traffic routes. The route I take depends on just how tired I am feeling: 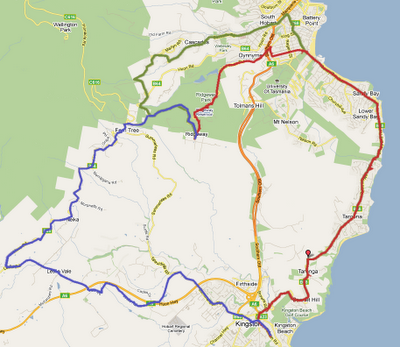