Today I got to play safety car for a bike race. That means either following the bunch along the winding hilly course, or leading to warn oncoming traffic of the impending peloton. This also means a cool magnetic orange light on the roof of the car (my daughters didn’t believe that I got to use a flashing light, until I showed them the photo) and insane descents with tyres squealing and passengers screaming while we try to stay ahead of the breakaway riders who are descending like the very hounds of hell are on their heels. 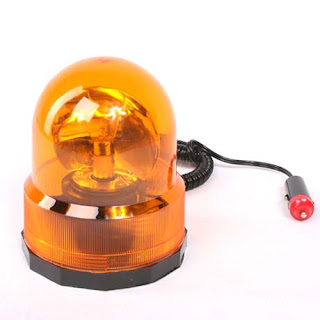 Right, I might be exaggerating a little bit: I didn’t have any passengers. But there most certainly was a hound from hell, and he (or she) was grey, fluffy, about 8 inches high, and fiercely defended his (or her) patch of road from the marauding cyclists, about 2km into the race. The organisers were so concerned about this frightening beast that they declared the first two kilometres would be neutralised. All heard and obeyed, except one. You always gotta have a smart guy in the bunch, John…

Turns out it was a smart move. He stayed away for the whole race and finished nearly 3 minutes ahead of the next rider. And set a course record.

But I’m getting ahead of myself. This was out-and-back course, so my job was to follow the last rider in the race as the tail car, until I saw the first rider returning, at which point I would turn around, pass them, and become the lead car for the return leg.

Of course, the leg out is mostly up hill. So I enjoyed a lovely drive on a beautiful spring morning, enjoying the fresh air, the new spring blossoms, the 4WDs and the serenity, all in 1st or 2nd gear.

A few kilometres before reaching the turning point, things suddenly changed. A sole cyclist shot past going up the hill somewhat faster than we were going down. Not far ahead of him was a little grey tourist car.  He was followed by a police car doing its bit of safety work. Quick! That means I need to turn. Pop into a driveway, check for more riders or cars, flip the car around and take off to catch him. Yikes. This was near the crest of the hill, and now he was over the other side and descending like a pro. I was pushing the little safety car just a little bit faster trying to catch him, but at 70km/h was not really gaining. Fortunately the road goes over a little rise soon after that and the police car behind him pulled over to let me past, and I was able to shoot past John to take my official position.

Then we’re heading back down the hill and for a moment I could imagine myself as a Directeur Sportif with my mike in one hand, map in the other, yelling at my rider as he flies down the hill, driving with my knees, my rookie reporter passenger sobbing as I take the corners on 2 wheels just to keep up.

But while the reality may have been a little tamer than that, ole John was pushing 90 soon after I passed him. He told me afterwards that he kept having to slow for the little tourist car in the corners earlier in the descent.

Fortunately we were soon off the steep descent and my job was merely to keep John in my rear view mirror and a few hundred metres back so he can’t cheat by drafting me.  My sister’s High Performance Barina was capable of handling this task.

The return leg was over much faster than the leg out! I rolled through the finish line, parked and was able to congratulate John after his impressive finish.

As I wiped the sweat off my hands and brow and made my way to the finish line, I reflected on all the excitement that a race marshall experiences in the course of an ordinary day. Who woulda thunk it?

2 thoughts on “The exciting episode of the race marshall”