Time and time again, we see calls from security experts for complex passwords.   Make sure your password includes lower case letters, upper case letters (how xenoglossophobic!), numerals, punctuation, star signs, and emoji.  It must be no less than 23 characters long and not use the same character twice.  Change your password every 60 days, every 30 days, every half hour.  Don’t use the same password again this year, or next year, or for the next 6 galactic years.  Never write your password down.  Especially not on a post-it on your monitor.  Or under your keyboard. 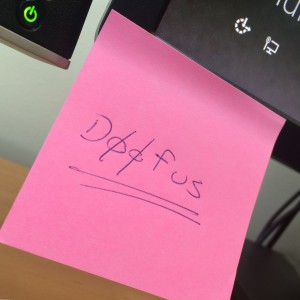 And it’s all wrong.  There are just two rules you need to remember, as an Internet password user:

It’s all wrong because all that complexity jazz is just part of an arms race in the brute force or dictionary attack password cracking game.

Say what? So a brute force attack is, in its simplest form, a computer — or hundreds of computers — trying everything single password combination they can think of, against your puny little password. And trust me when I say a computer can think of more passwords than you can. Have you ever played Scrabble against a computer?

Brute force attacks on Internet passwords are only effective on well designed sites when that site has already been compromised.  At which point who cares if they know your password to that site (because rule 1, remember): they also know everything else that site has recorded about you.  And anyway you can just change that password.  No problem (for you; the site owners have a big problem).

Now, if you are unlucky enough to be targeted, then complex passwords are not going to save you, because the attackers will find another way to get your data without needing to brute force your Google Apps password.  We’ve seen this demonstrated time and time again.  And if you are not being targeted, then you can only be a victim of random, drive-by style password attacks.  And if you followed rule 2, then random, drive-by style password attacks still won’t get you, because the site owner has followed basic security principles to prevent this.  And if the site owner has not followed basic security principles, then you are stuffed anyway, and password complexity still doesn’t matter.

In fact, complex passwords and cycling regimes actually hurt password security.  The first thing that happens is that users, forced to change passwords regularly, can no longer remember any passwords.  So they start to use easier to guess passwords.  And eventually, their passwords all end up being some variation of “password123!”.

The Bearers of Responsibility

The people who really have to do the hard yards are the security experts, software developers, and the site owners.  They are the keepers of the password databases and bear a heavy burden for the rest of us.  Some suggestions, by no means comprehensive, for this to-be-pitied crew:

The Flaw in My Rant

Still, my rant has a problem.  It’s to do with Rule 1:  A separate password for every site.  But just how many sites do I have accounts for?  Right now?  402 sites.

How do I manage that?  How can I remember passwords for 402 sites?  I can’t!  So I put them into a database, of course.  Managed by a password app such as KeePass or 1Password or Password Safe. Ironically, as soon as I use a password manager, I no longer have to make up passwords, and they actually end up being random strings of letters, numbers and symbols. Which keeps those old-fashioned password nazis happy too.

Personally, I keep a few high-value passwords out of the password database (think Internet Banking) and memorise them instead.

Of course, my password safe itself has just a single password to be cracked.  And because I (the naive end user) store this database on my computer, it’s probably easy enough to steal once I click on that dodgy link on that site…  At which point, our black hat password cracker can roll out their full armada of brute force password cracking flying robots to get into my password database.  So perhaps you still need that complex password to secure your password database?

What do you think?