One of my dev machines has long had a weird anomaly where file operations in Explorer that should prompt for UAC, such as copying a file into C:\Program Files, would instead silently fail.

This led to all sorts of issues, from being unable to delete certain files — they’d just obstinately sit there, no matter how much I pressed that Del key — to trying to move folders containing a hidden Thumbs.db file and being unable to move the folder.

My UAC settings were the Windows defaults. Nothing weird these. So I’d always treated put this issue into my “too busy to solve this now” basket. The classic basket case. But today I finally got fed up.

After a quick search for the symptoms on Dr Google returned no results of significance, I decided I needed to trace the cause myself.

Process Monitor to the Rescue

It was time to pull out Process Monitor out of my toolbox again! Process Monitor is a tool from the SysInternals Suite by Microsoft that monitors and logs details on a bunch of different operations on your computer. I use Process Monitor, Procmon for short, all the time to solve problems big and little. But for some reason, it hadn’t crossed my mind until today that I could apply Procmon to this problem.

First, I configured Procmon to filter all events except for those generated by Explorer.exe and Consent.exe. I wasn’t sure if Consent.exe was involved in the problem (Consent.exe being the UAC elevation prompter), but it wouldn’t hurt to include it to start with. Note that all those Exclude filters are default filters setup by Procmon to exclude itself and its friends, removing that confusion from the logs. 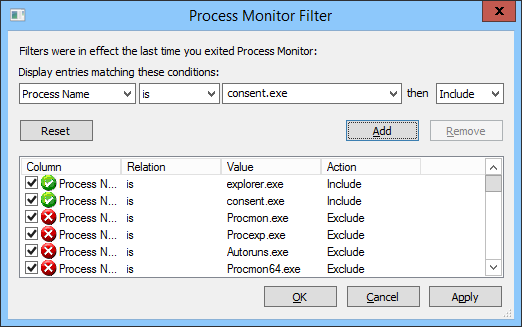 Then I went ahead and tried to copy a file into C:\Program Files (x86). It was just an innocent little text file, but Explorer of course acted like a Buckingham Palace Guard and silently and stolidly ignored its existence. 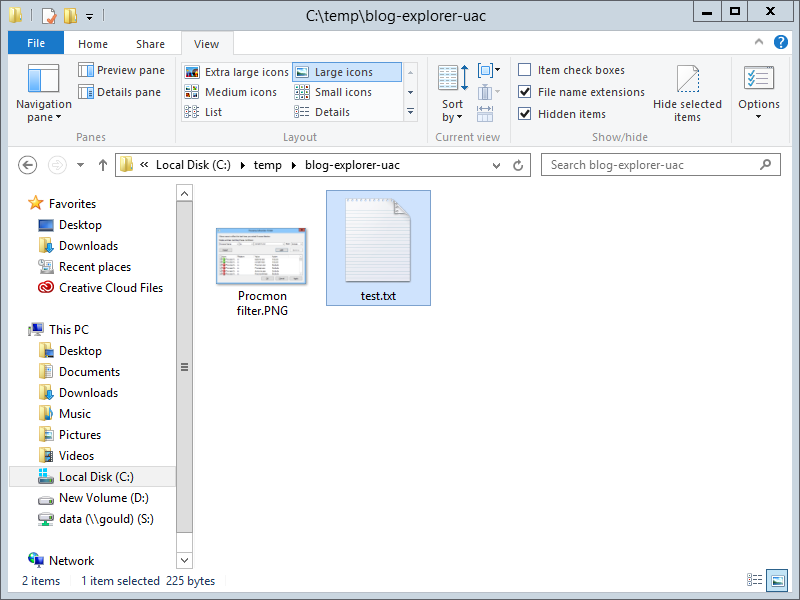 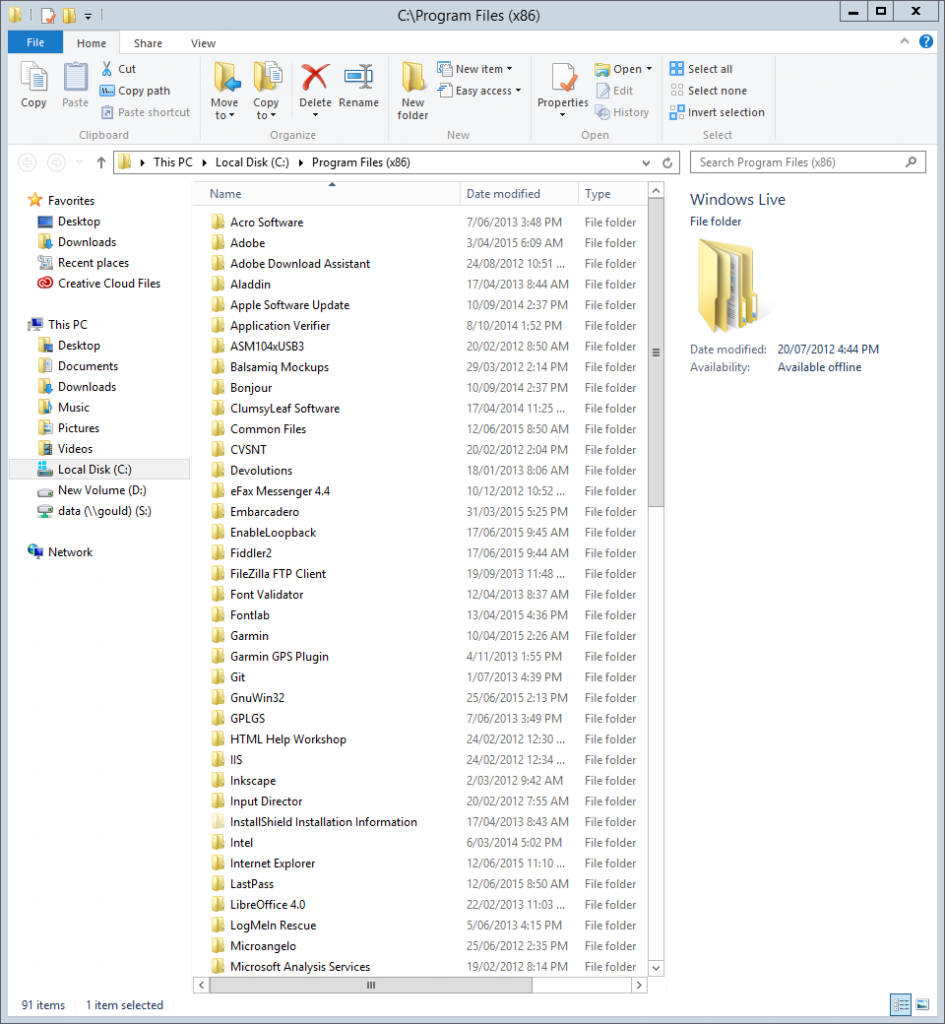 I used the clipboard Ctrl+C and Ctrl+V to copy and paste (or attempt to paste) the file. I didn’t think the clipboard was at fault because all other UAC-required file operations also failed silently. I could have dragged and dropped, it would have had the same effect.

But now, with procmon, I had captured the communication that went on behind the scenes. All those secret coded winks and nose scratches that told Explorer to fob off any attempts to trigger a UAC prompt. Here’s what I was presented with in the Procmon log.

I searched for the name of my text file (test.txt), and used Procmon’s Highlight tool to highlight every reference to it in the Path column. This made it easy to spot nearby interactions that may have been related, even if they didn’t directly reference the test.txt file itself. You can see below two of the highlighted test.txt lines.

Because there was a lot going on, I filtered out a lot of Operations that I thought were not relevant, such as CloseFile, RegCloseKey, RegQueryKey, ReadFile and WriteFile, among others. This reduced the log considerably and made it easier to spot differences (my screen capture below shows the filtering after it was reset, however — I forgot to capture the filtered trace, sorry).

I decided to also capture a trace on a machine where UAC prompting worked. I then compared the two logs. After scrolling back and forth around the many references to test.txt, I saw that on my dev machine, there was an additional interaction, right before the point where the prompt dialog was presented:

That’s right, I had a program called TortoiseCVS installed on this machine which hooked into Explorer in a variety of ways. After the FileOperationPrompt references on my second machine, there was no reference to TortoiseCVS. Here’s what it looked like on the other machine: 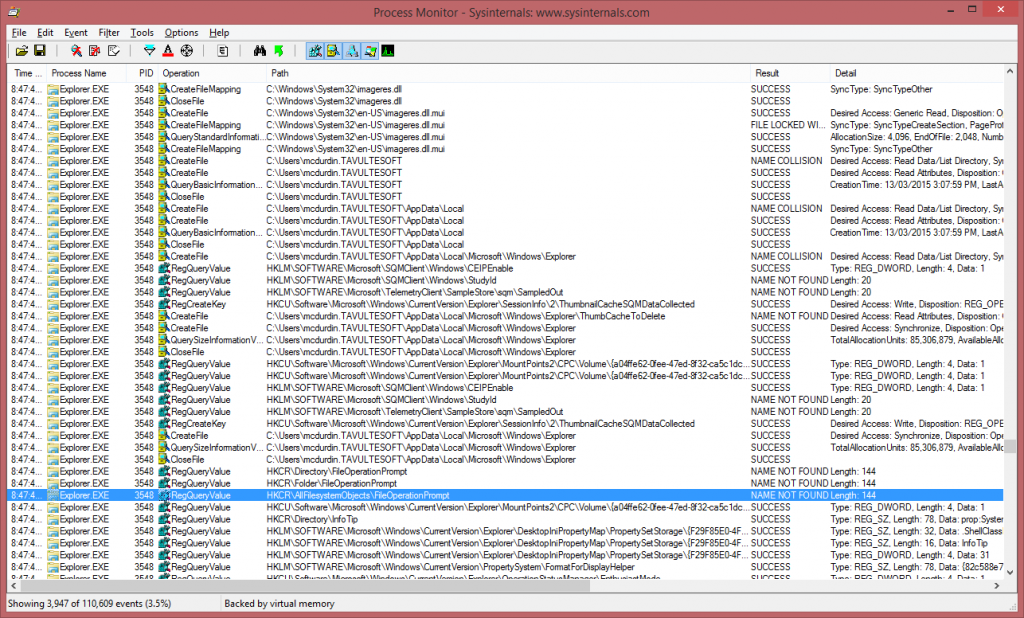 That was the only visible difference of significance in the logs.

Now for those of you who just knee-jerked into “why on earth are you using CVS?!?”, calm down! This is a story, and I’m telling the story.

I decided that I didn’t really need TortoiseCVS installed and decided to try uninstalling it. 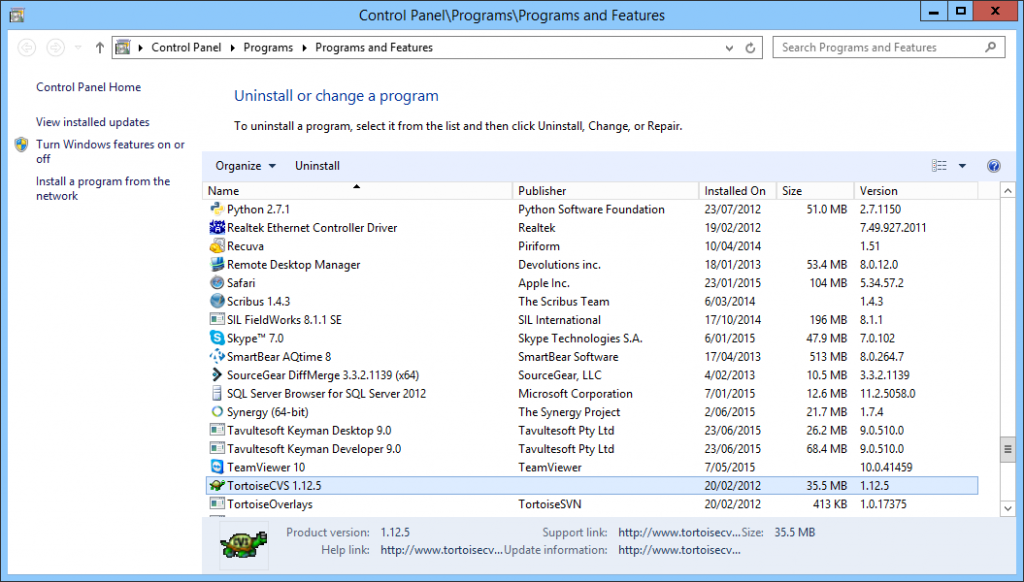 Sadly, uninstalling it required a reboot, no doubt to remove its old fashioned hooks into Explorer.

After the reboot, I tried to copy my innocent little text file again.

Success! I was now presented with the prompt I wanted!

Another case closed thanks to SysInternals Suite and Mark Russinovich!