Joey was off at a birth, and so the girls and I were stuck at home on a wild and windy Saturday morning in the middle of winter. It was raining and blowing a gale, but actually not too cold… At least 7 or 8 degrees.

So, perfect weather for a family bike ride, right? I pulled out the trusty “family bike” and the bike trailer, which we hadn’t used for some time. The girls were thrilled! I took the opportunity to swap off the flat pedals and put on some SPDs from my defunct road bike. Pulled on all my winter gear, rugged up the girls, put the lights on, and off we rode.

Got 1km from home and realised that we’d left the girls’ helmets behind! Groan. Funny how one can ride such a long way but turning around and going home is so hard. Still, it didn’t take long so no real harm done 🙂

We rode carefully down the long descent into town, the girls nice and dry, me not so much. First stop, bike shop to pick up a spare part for my roadie. Then the coffee shop.

Jam Packed is a great place to stop and have a coffee — especially if you are on a bike. The atrium has plenty of space to park a bike or 20 and being a big dry open space the smelly, wet bike clothes hopefully don’t bother other patrons as much as in some other coffee shops!

Coffee and mango juice done, it’s time to head off to the library, where we stayed and read books until it closed (unfortunately rather early, 2pm). 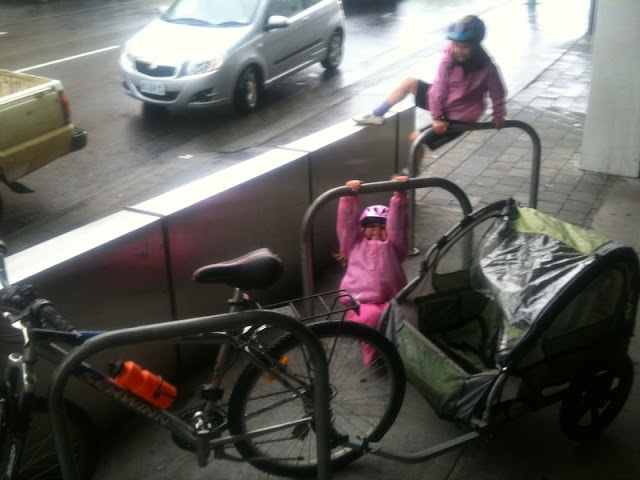 The picture shows us parking the bike at the library. We couldn’t help ourselves and borrowed a few books, which we wrapped up well in plastic bags in the boot of the trailer.

Then it was off to Salamanca Fruit Market for lunch stuff. Hannah and I went for sushi, and Beth had a roll. Now for the trek home.

It was still blowing a gale, but the rain had eased for a bit. Riding up Macquarie St, we were heading straight into a block headwind, a real gale! I was struggling along as we hit the real hill past the Cascade Brewery. I read later that wind gusts were up to 80 km/h!

I used the toe-on-the-chain technique to drop the chain onto the smallest chainring. I really must fix that front derailleur sometime soon. We slogged away until we reach the bridge, where I was quite happy to pause for an emergency loo stop for the girls! 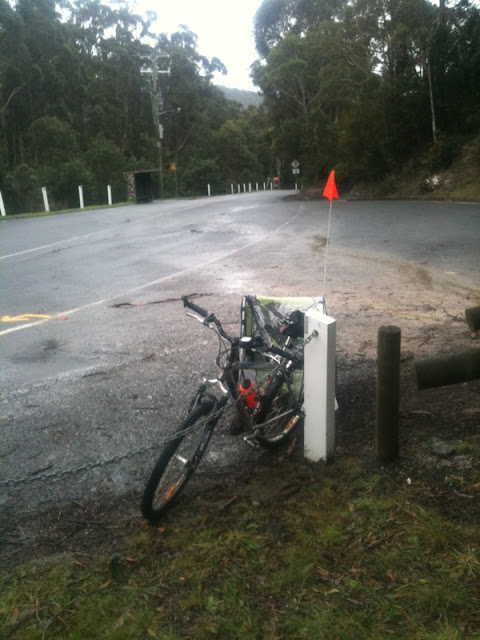 The remainder of the ride up the hill with 60kg of trailer doing its best to drag me back down again was definitely the slowest I’ve ever climbed Strickland Ave, by a long way! Fortunately we were sheltered somewhat from the wind by the curves of the hill.

We even got a tailwind along Chimney Pot Hill Rd but as we turned into Ridgeway we were hit by the full force of the gale and we came nearly to a complete halt! I was grinding along in bottom gear, on the flat mind you, out of the saddle, crouched over my bike like a Tour de France contender, face contorted as I forced my way against the fury of the wind — and rain — and into our driveway. The girls jumped out of the trailer and bolted for the shelter of the house while I struggled to open the door to put the bike and trailer away. I let go of the trailer for a second to brace the door against the wind and had to chase it half way down the driveway. Finally I dragged it into the basement, let the door slam in the wind and heaved a sigh of relief! Home!

The next morning my legs feel like I’ve just ridden a serious race…  And Strava has awarded me a 5th place in the climb “Hydro to Strickland” — because I’ve never ridden that route before, and because there were only 4 other riders who have ridden that route!