Just a very short post today.  We still have some way to go in mixing RTL and LTR text.  For example, the following image, snipped from Outlook 2010, shows the issue:

Note how the full stop in the subject appears to the left of the English text.  This is because the display renderer has assumed that the whole run of text is right-to-left, so punctuation is treated as right-to-left, and so displays after (in a right-to-left sense) the text.

The question is, of course, how do you determine directionality given an arbitrary plain text string?  It’s not really possible to do so reliably in the absence of other metadata.  The W3C article on directionality is helpful here: http://www.w3.org/TR/html4/struct/dirlang.html

Another view of the message:

Interestingly, Outlook Web Access does not do this, because its UI takes its directionality from the base HTML document: 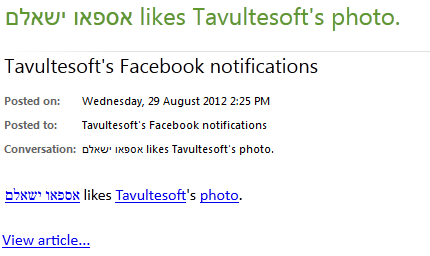 2 thoughts on “Mixing RTL and LTR: Plaintext vs HTML”